I just wanted to take the time mention another more personal reason as to why I started AnimeKoumi. As you know, I have been designing and creating stationery and gift items and featuring them in AnimeSpiceStore.com for years. This small business of mine started from a combination of my love for drawing anime and creating graphic design in high school, and I have been managing it since then.
Fast forward to December 2015. When I had first heard of Doki Doki Crate, it was the first time I had also heard of subscription boxes. Their ‘kawaii’ crate was a monthly box of cute Japanese and anime related items shipped to your doorstep, and I fell in love with the concept of it.
Even though they had the typical Totoro & Hello Kitty brands in their box, I hoped possibly since they were located in the U.S. they would be open to sourcing local products as well. I’d had an idea for kawaii style cupcake stickers based off my previous art, “My #1 Cupcake”, and decided to spend a few days designing it as an exclusive for this box. Was I overly optimistic about this? Yes, foolishly so, but I truly believed it would be a nice add-on to the box ( it was kawaii). If I were to get rejected I wouldn’t mind, as so is life.

Either way, after a few tries, I presented my products to them and they expressed interest in the cupcake stickers ( just what I had hoped!) but I would need to produce large quantities ( in the thousands!) in the next 3 weeks. Could I do it? I said I could.
As you can imagine, the next few days I spent looking at printers, setting up files, making calculations, etc., basically summoning up everything I had ever learned about business. Less than 5 days later I was ready. Japan Crate (Doki Doki crate’s company) asked for samples, and we sent them. I had my fingers crossed, knowing that if we were rejected, we would just have to accept it.
Unfortunately, the stickers were rejected. But the reason why left a bad taste in my mouth.. They told me they couldn’t include them with my branding on it. To have my artist name on the back, was it really that bad? All the other items were branded with tags and I was suppose to be anonymous? They also mentioned my price being not what they wanted, which I had set at a “pocket change” amount. I knew rejection was possible, but for an amazing $30 box like theirs, I felt belittled.
Around the time of the rejection, I started to hear the rumors about the unlicensed and bootleg items in Doki Doki crate’s box, and soon came to find that pretty much all of their items were fake knock offs for their December, January, and February crates. 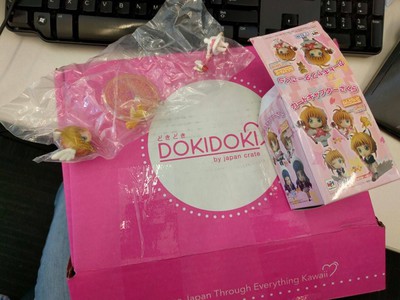 That means, my cupcake stickers would have been the only legal thing in February’s box! As I witnessed an outpouring of anger around this issue and the number of dissatisfied customers growing, I’m actually very glad I didn’t end up in Doki Doki crate.
Of course, I was upset for a while, and had a conversation w/ my mom who had seen me working through each night, and she said, “You don’t need their box. You can do your own.” and it sounded like the craziest idea at the time. But then I realized I had been designing stationery and running this business since I was 14 and I had JUST proven that I could do it, being professional and pulling everything together in a matter of days. And on top of that, I’m extremely passionate about providing a fun, happy experience for my customers.  I thought stating my items were “Made w/ Love” was ridiculously cliche but it’s true because I love what I do.

So 2 months later, I’m proud to say I launched my own box: AnimeKoumi!
It’s a monthly surprise of stationery and gift items designed by yours truly. On AnimeKoumi.com, every month we pick a new theme, and I start designing and creating an amazing gift set for our subscribers ( and nothing will be bootleg!) If we survive, we’ll survive, if we don’t, we won’t, but at least I’ll be able to claim my own branding and live a dream.
The first Koumi boxes ship out April 1st. Sign up for a subscription today!
Get 20% off your first box when you join our mailing list!
UPDATE!!! – As the first March Doki Doki crate unboxing videos emerge, I find that Japan Crate has copied my idea for featuring stickers with original art. This is what adds insult to injury: They claimed that my branding was an issue even though they had sent out unlicensed and illegal items to begin with, and now they decided to make their artists create sticker sheets to throw in the box just to save a buck or two. Even though they have the right to do whatever they want, there is a direct connection to when I presented my stickers and when sticker sheets of virtually the same size appeared in their box a month later. I just don’t think the quality is comparable and leaves customers saying “okay?”.

So far, what I have seen this company do to its customers is deplorable. I would not work with them again.
A lot of time and effort went into AnimeKoumi as a result. And my cupcake stickers? They will appear in this summer’s Cupcake Party themed box. Keep an eye on the AnimeKoumi site for updates.
Thanks for reading you guys!